What a summer we are having. Long, hot and for most places, dry. Drought, common in many parts of the country has once again broken out but often in places not known for their lack of rainfall. The west coast of the South Island, for example. Summers across New Zealand ...

What a summer we are having. Long, hot and for most places, dry. Drought, common in many parts of the country has once again broken out but often in places not known for their lack of rainfall. The west coast of the South Island, for example. Summers across New Zealand ...

What a summer we are having. Long, hot and for most places, dry. Drought, common in many parts of the country has once again broken out but often in places not known for their lack of rainfall. The west coast of the South Island, for example.

Summers across New Zealand can vary greatly from year to year in terms of heat, rain, wind and sunshine. In the north, we are always guaranteed warm and humid with average humidity between December and February sitting at 70-80%. We can go weeks with little rain or be hit by a series of remnant tropical cyclones seemingly every other week.

The fact that the country is long and relatively skinny stretching 1400km from 33 degrees south to 47 degrees south means you may be living in the sub-tropical north or the temperate south. The huge mountains that form the spine of the South Island and the high hills of the North Island lead to marked climate differences between the west coast to east. As a general rule the west coasts of both islands (including Auckland and Wellington) receive abundant and welcome rainfall. In winter, it must be said we do at times wish for the rain to stop. Along the east coasts of both islands however the prayers are for more rain as they lie in the rain shadow of the mountains and hills. Living with six months of summer with its accompanying drought is commonplace for east coasters – especially in the North Island.

The best example of these regional variations is the small Central Otago town of Cromwell which in any given year is likely to record both the hottest and coldest temperatures. Nestled in a bowl and surrounded by mountains on three sides, summer temperatures well in excess of 30 degrees are common. Come back six months later and they are lucky to hit double figures. It also seldom rains – average annual rainfall is around 330mm.

Drive another 80km or so to the west and cross the mountains and rainfall increases to 3000mm a year. Temperatures seldom hit 25 degrees despite being on the same latitude.

Right now, we are in the middle of a La Nina weather event and that has caused average sea temperatures in the Tasman Sea to the west (where our major weather comes from) to be around 2.5 degrees warmer than usual. It is being described, seriously, as a marine heatwave. This in turn has pushed up onshore temperatures by 2.5 degrees (we are talking Celsius here) during December and January is set to become the hottest on record.

Summer sea temperatures around Auckland and Northland peak in February at around 22-23 degrees. Last week we were out fishing and the water temperature was 24 degrees. Around Auckland recently temperatures are being recorded of 26 degrees. I can tell you – that’s warm in anyone’s language – in fact as a scuba diver that is not far off what you’d get close to the equator.

So many parts of the country are bone dry. As I say, not necessarily unusual, but what we have seen is many places going weeks with no rain. Over summer and up this end of the country we get rain that is occasional but tropical in intensity.  Auckland had 8% of its usual 70mm in December. January, I suspect, will be ‘average’ but that is because we have just had the first tropical cyclone of the season dump 40mm of rain on us yesterday (I could hear my vegetables and fruit trees singing) and two weeks ago we had a similar amount of rain over 24 hours. Temperatures since December haven’t fallen below 25 degrees and we have had plenty of days closer to 30. For those of you that live without humidity, add around 5 degrees to appreciate what it feels like.

Many of my clients from South Africa who have arrived in the past three months and have headed for places like Wellington, Christchurch, Timaru, Ashburton and Dunedin are all expressing surprise at the heat. All these places, except Wellington, have recorded multiple days through December and January of between 33-35 degrees. Even Invercargill at the bottom of the South Island is a place that usually enjoys summer temperatures in the low 20s yet they too hit 33 degrees a couple of weeks ago.

For those living in Wellington, this summer has seen record sunshine and little rain. Hate to tell you newbies to Wellington to enjoy it; it isn’t going to last.

Christchurch recently went 47 days without a drop of rain (not unusual for them to get no rain, they only get 800mm or so a year) but they have been hit by really hot weather. Dunedin was 33 degrees a few days ago. Clients of mine from Durban were moaning a few days ago to me about the heat. They’d been told by people in South Africa before they left, they’d need thermals when they arrived in Dunedin in November. Fake news! In winter, perhaps but my youngest son is studying there and he’s never worn thermals yet even in the middle of winter.

A summer to remember and one that isn’t expected to end for another few months. I am someone who doesn’t like the cold but in Auckland when the day time temperature is 26-28 degrees (feels like 32-33 degrees) and overnight lows are 22, it makes sleep difficult. While business and shops are air-conditioned for some reason we don’t tend to have air-conditioning in our homes. Weird. Plenty of people are going without enough sleep and the city is getting full of grumpiness (me included).

Long may it last – the summer, not the grumpiness. I’m off for a swim in that 24 degree Pacific ocean and am looking forward to some more fishing over the weekend.

Ian, thanks for the detailed report. You sound very much like you're ready to switch job and become the weatherman on one of those national TV channels! 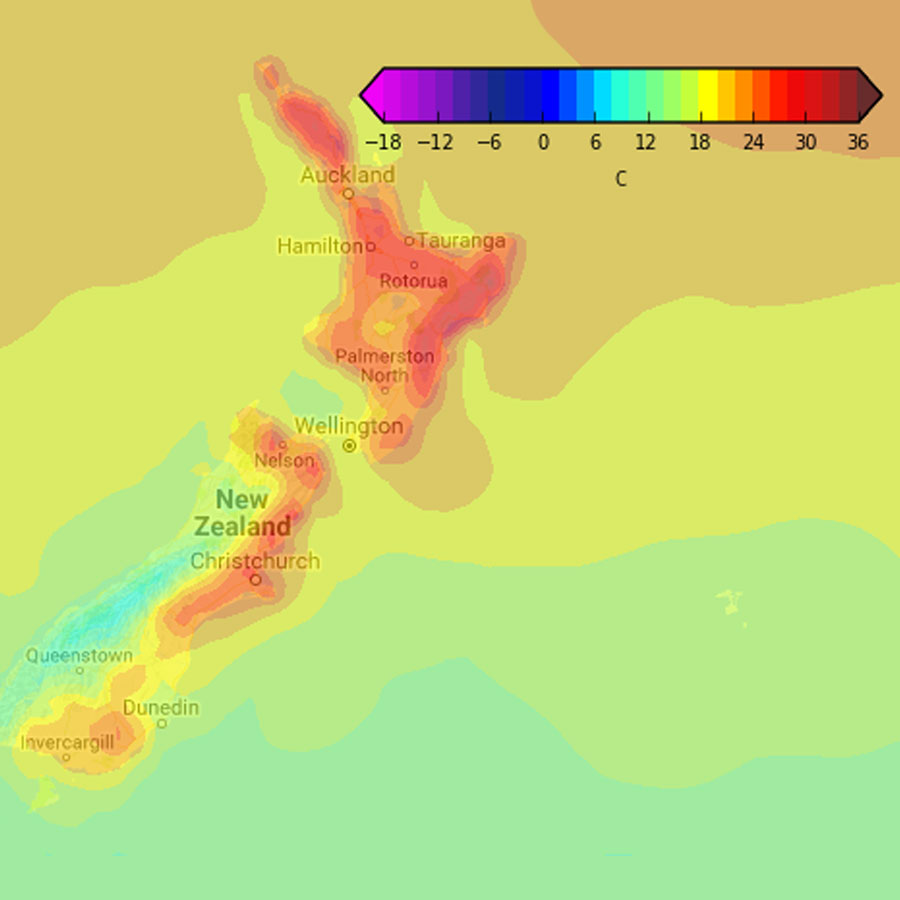