Those of you that come from western or ‘developed’ countries and who have been to wet markets in Asia or Africa will appreciate it when I say they stink, are an affront to the senses, look like a breeding ground for all sorts of dangerous bacteria and would turn the ...

Those of you that come from western or ‘developed’ countries and who have been to wet markets in Asia or Africa will appreciate it when I say they stink, are an affront to the senses, look like a breeding ground for all sorts of dangerous bacteria and would turn the ...

One of the reasons I love my day job is because I get to work with people who see the world differently to me. It strengthens me. As nations, we all like to believe that ‘our way’ is the best way but experiencing different cultures, traditions, languages and values can challenge that. It’s why I am staunchly pro-immigration. Not untrammelled or unplanned, but orderly.

Spending time as a minority, even on holiday, getting off the tourist buses, souvenir trails and out of the comfort of those sterile multi-national hotels which, let’s face it, seldom reflect local culture, can be incredibly rewarding. I get to deal with such ‘minorities’ every day at work; it’s nice to be one at times to better appreciate what it feels like.

Travel can challenge us - be it language, food or simply ways of thinking - it is healthy for us all because it gives us a chance to (re)assess ‘our’ way of looking at the world. Most societies think their way of doing things is the best. I guess that’s why my ancestors and their European competitors decided to carve the world up between them and bring ‘European standards’ to the New World. Along with Christianity of course to save all those savages and souls from wasting their lives and risking a descent into hell. One of the major errors of the day was that we spent a lot of time colonising and telling people what was good for them and what wasn’t, without really listening to what they might have been able to teach us. I might add that Captain James Cook was something of an exception.

One of the highlights of our ten days in Hanoi was a morning in cooking classes. Part of that was a visit to the local market and, yet again, I was forced to reassess our ‘west is best’ approach – this time to the simple act of buying food.

Those of you that come from western or ‘developed’ countries and who have been to wet markets in Asia or Africa will appreciate it when I say they stink, are an affront to the senses, look like a breeding ground for all sorts of dangerous bacteria and would turn the local City Council Food Hygiene Inspectors green if they didn’t die of fright first. No Food Hygiene certificates hanging on the walls here to reassure the purchaser that strict food safety and hygiene regulations have been met! (There are usually no walls...)

In 33 degree heat, open tables of meat are laid out, live fish swim in aerated paddling pools, cages full of protesting chickens line the alleys, (vegans may want to skip to next paragraph) every part of a pig is laid out right down to its snout, tongue, ears, trotters, insides – nothing is wasted here. Seafood is layered in plastic baskets, snails and crabs do their best to escape the confines of their containers, fresh fruit and vegetables are piled high. There is not a freezer in sight let alone a fridge. The gutters sparkle with fish scales and blood splatters. It’s raw in more ways than one.

To my surprise, I thought they operated like this simply because there were no freezers, but was told the local view if often that if it is refrigerated or frozen it is viewed with suspicion because it is considered old.

At dawn and in the late afternoon the stall holders bring their (until recently still oinking, mooing and bleating) livestock from their farms and still swimming fish from the local rivers. The animals that now bedeck the tables were crowing a few hours earlier as the sun came up and the pigs were running around in their pens, contemplating another dawn. The fruit in the market was picked earlier in the day for the most part and the vegetables were harvested a few hours before they went on sale.

No one will buy a dead fish because a dead fish is an old fish. River fish are preferred to sea fish because the sea fish travel around 3 hours to get to the market once they come off the boats at the coast. The river fish came from a local lake or river and spend 15 minutes on a bicycle to get to you. Alive. Seafood is less popular in part because it is more expensive having travelled from the coast and it’s considered more ‘dangerous’ because it’s ‘old’ even though it travels in ice. So, you pick your fish from the paddling pool and as it gasps for some oxygenated water, it is dispatched and prepared while you watch. They’ll do the same with the chickens and ducks. To our eyes a fluffy, quacking, white duck is a long way from the lip smackingly good Peking duck of my local Mount Eden Chinese eatery but of course they all started off feathered and cute, waddling to the local pond.

Where we see unhygienic and cruel, the locals see fresh and hearty.

I started to ponder our own means of growing, dispatching and distributing food and you conclude that many Vietnamese may well consider what we do in our countries to be extremely odd and unhygienic – supermarkets full of ‘old’ food; no vegetables in my local supermarket had their roots in the ground a few hours earlier or fresh fruit the sun upon them for several days. The butchery section is full of meat from animals that were slaughtered in giant abattoirs, no doubt stressed and terrified following a lengthy road trip crammed into stock trucks.

Yet, we have something to teach these people about food preparation and hygiene.

So called ‘Farmers Markets’ are of course making a big comeback or are being set up in the cities and towns of the New World.

In downtown Auckland, a 433 hectare space now home to 45,000 permanent residents with several supermarkets to cater for the rapidly growing permanent population, one thing we are missing is a fresh produce market. Many of us, even in Auckland, detest supermarkets, the thought of the ‘weekly shop’ makes people like me gag and we prefer to shop for the evening meal on our way home at one of our smaller deli type mini markets springing up across Auckland. The daily shop of our grandparent’s generation is making a very big comeback.

My wife and I are looking to sell our Mount Eden suburban home and develop a 150sqm space in the city we own to move into. We won’t have room - let alone any desire for - a space taking deep freezer which we will pile high with food. We want fresh.

Although city planners are looking for and encouraging thousands more people to call the Central Business District (CBD) home, local fresh produce markets, so long a feature of European and British cities, have never really taken off in either Australia or New Zealand. I was reading earlier today how, in Barcelona, no one lives more than ten minutes’ walk from one. I wonder if our city planners are setting aside any spaces for such markets? They are more than simply a place to buy food, they serve as social spaces and meeting places and might assist our own Auckland CBD evolve away from booze and clubs to places families want to raise children. If we are serious about this, as I am certain that we are, we are going to increasingly demand such amenities.

We don’t have to be slaughtering goats in the gutters and of course we’d expect different standards to the old quarter of Hanoi, but one thing that the stroll around the market with the chef taught me was to see what was in front of my eyes in a new way.

In a way, it was kind of obvious – I haven’t met anyone, let alone a poor person, who, if they cannot work because they get food poisoning and who does not have a first world health care system or welfare to fall back on, would ever display, prepare or sell vegetables, fruit or meat in a way that turns their customers off returning because they got sick.

Until I had the benefit of being with a local chef who could explain the local ways for a morning, I really had no clue. I will never look at a wet market in the same way and hope if we set aside space for something similar in downtown Auckland we might not get ourselves all tied up in food hygiene rules and regulations...many of our recent migrants from Asia will thank us for it.

And we might thank them for teaching us our way isn’t always the only way. 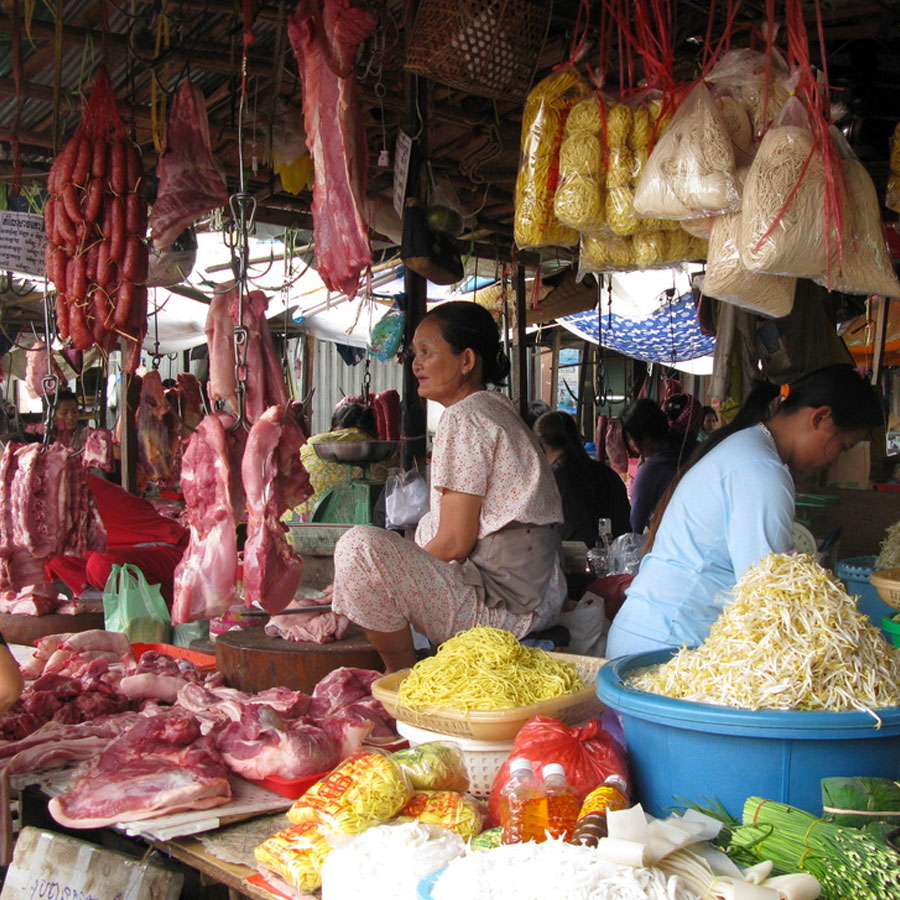