For the past week I've been in Hong Kong talking to those worried about their children's future and the creeping influence of China on the principles they hold dear, like the value of their one vote and being allowed to speak their minds. Political changes aside, of all the Asian ...

For the past week I've been in Hong Kong talking to those worried about their children's future and the creeping influence of China on the principles they hold dear, like the value of their one vote and being allowed to speak their minds. Political changes aside, of all the Asian ...

For the past week I've been in Hong Kong talking to those worried about their children's future and the creeping influence of China on the principles they hold dear, like the value of their one vote and being allowed to speak their minds.

Political changes aside, of all the Asian cities I visit, it is my favourite. The food, the scale, the shops Although I struggle with the teeming hordes. I struggle even more when a lot of the teeming hordes dawdle along, tapping messages into their cellphones, but that's another story.

What makes this densely crowded city more incredible to me is the way their planners have built a public transport system that so effectively moves people around. It never fails to amaze and impress me that in a city of over 7 million people, where most live in an area about one third the size of Auckland, it is such an easy place to get where you're going thanks to its well developed public transport system; particularly its MTR (Mass Transport Railway).

A few days ago and having a rare day off, I needed to escape the masses and try and find a quiet place to do some walking. Preferably with some trees and with what passes for fresh air in this part of our planet. So, on the MTR my wife and I jumped. Under the harbour from Kowloon, we made one seamless and quick change of trains on Hong Kong Island, another change a few stops later, took a third back under the harbour again and then after 11 stops and around 30 minutes of travel time, up we popped in the east of Kowloon, for the grand price of NZ$6. On to a waiting mini bus and some 20 minutes later we arrived in the coastal town of Sai Kung. On to an old Sampan and 45 minutes later we were dropped onto Sharp Island. By Hong Kong standards, deserted, and no more people there than you'd find on a busy summer day on a beach near Auckland.

While the travel to get there might sound like a bit of a hassle, it was actually very relaxing. I didn't need to drive. I didn't need Google maps. In a case of wanting a day chilling, the journey was all part if the experience. We were on the island within 90 minutes of leaving the hotel. Seamless. Easy. Cheap.

A long hilly walk for two hours in the baking sun it was to be sure shades of 'mad dogs and Englishmen' but the sweat did us good. The sea at the end of the walk was inviting and warm, the sun hot and the booms anchored offshore saved us from swimming among too much discarded plastic and other human made detritus.

I was desperate for the sights and smells of forest, and the MTR and mini bus delivered.

Even in peak times, it works. Might be standing room only in the trains but they are air conditioned and for the most part, Hong Kongers are polite and respect one another's tiny personal spaces.

Chalk and cheese. Crossing the road on the hoof in the Old Quarter is a near death experience.

I've been in peak hour traffic in London, been abused by rude discourteous cab drivers in New York, survived the madness of KL taxi drivers in their decrepit cabs, sat choking on exhaust fumes in taxis in Jakarta but nothing, and I emphasise, nothing, prepared me for Hanoi.

I don't think I have the words to describe the chaos of 9 million people and no public transport. If you've ever seen one of those programmes of a close up of blood coursing through a human's veins, with thousands of corpuscles bouncing along barely avoiding one another, replace the veins with often narrow streets, corpuscles with motorbikes, add on average 2 people to each (most without helmets), many with babies and infants, wives riding side saddle, some eating ice-cream whilst texting (saw it!), you might start to get the picture. Unlike the veins and arteries in your body, these motorbikes aren't all travelling in the same direction. I can but wonder how the streets aren't flowing in blood.

Not certain why the good folk of Hanoi aren't all tone deaf. Although there is little point in using their high pitched beeping motorbike horns or throaty parps of the BMWs and Land Cruisers, they all do anyway. Nobody seems to have worked it out yet that it makes no difference...

The driver that delivered us to our hotel suggested that there are road rules and laws here but the laws are "flexible"...I think he meant "optional". The result is chaos on a scale I've never witnessed. And so we sat on a restaurant balcony last night two floors up, enjoying a sultry evening, overlooking a square dominated on one side by an increasingly grimy Christian cathedral - a relic of French imperialism - drinking cool beers, eating the most amazing food and watching this amusing spectacle, wide eyed and for the most part, speechless, going on below us. We sat transfixed. How we didn't get to witness any deaths is beyond me.

Thousands of people are arriving in this city every week (good old communism, you don't work, you don't eat) seeking work and massive apartment blocks are rising from former paddy fields everywhere to cope. Real estate is booming.

What seems to be missing is the concurrent development of something like Hong Kong's MTR. Without it, these mega cities of Vietnam (of which they will have two within a decade) will end up like Jakarta; choking on their own vehicle emissions, pushing up greenhouse gas emissions and pushing down quality of life and economic prosperity.

I hope among all this chaos is some plan to quickly roll out compressive and cheap public transport.

Thank you for that entertaining description of my experience in Hanoi.
I actually ended up loving the chaos ( only because I knew I was going home ) once I had figured out the rules of the road for crossing.
Having scooter-ed in Bali I did not however pluck up the courage to do it in Hanoi.
As you say though, while it works now...... they had better come up with a solution for their future traffic problems.
...and yes, the food was fantastic and the street beer a pleasant experience. 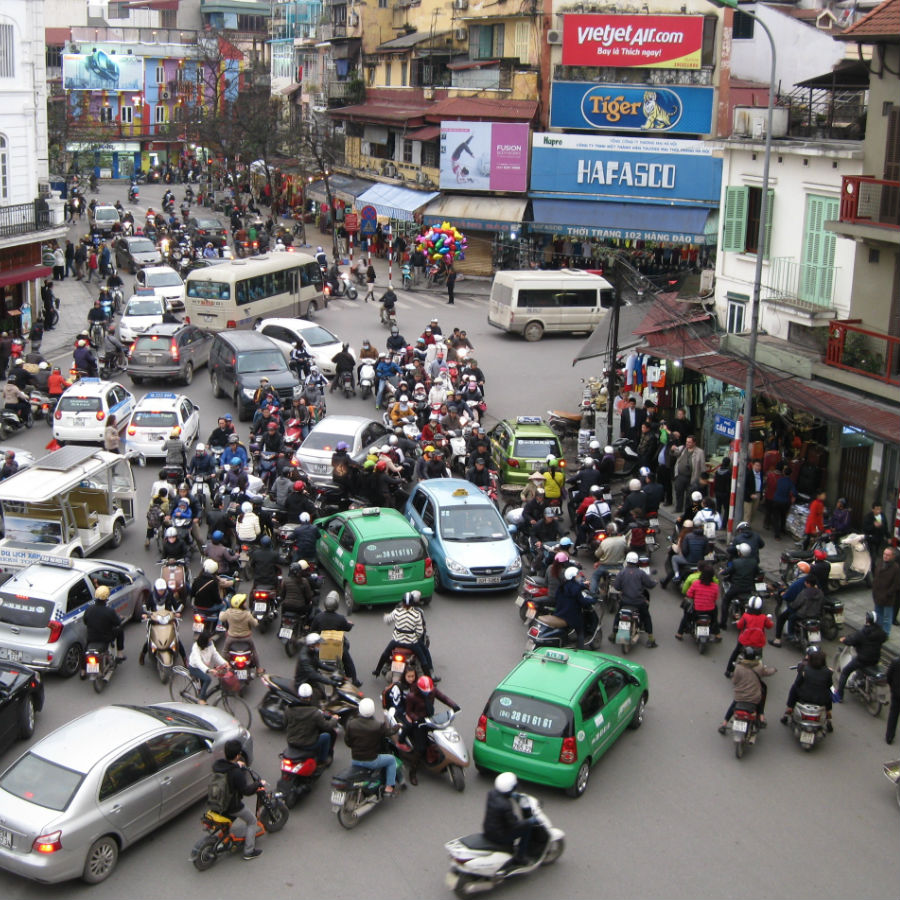